The cutest clay baby helps with a simple explanation of RDI

I just got into a friendly discussion on my Food for Thought facebook page about RDI (https://www.facebook.com/pages/Food-for-Thought/215175045234350 - shameless self- promotion, please head over and ‘like’ my page).  The person asking me about it wanted an easy read introduction to what RDI is and how it works and I thought I would just reproduce it here in case it’s useful as a point of reference in the future – for me or for anyone else.  This is how I explained it:

We know that autism is a developmental disorder.  That means kids have missed out on key communication and thinking milestones in the early stages of their development.  We know what some of these milestones are (they have fancy names like ‘referencing’, ‘joint attention’, and ‘theory of mind’) and we know that if children don’t master these milestones, they become rigid thinkers who find it difficult to cope with uncertainty and change.

This is why children with autism have high levels of anxiety and are prone to what some parents describe as ‘meltdowns’ – they are constantly coming up against uncertainty and change and are unable to cope with it.

Everyday uncertainties include (for some children) simple things like a change in the route of their journey to school, new clothes or shoes, a new teacher at school…….things most typically developing kids wouldn’t bat an eyelid at.  If a child with autism is unable to cope with any type of uncertainty, they react in one of 3 ways – flight, fight or freeze.  What we see as ‘autistic behaviours’ (avoidance, withdrawal and meltdown) are actually an expression of this anxiety and inability to cope.

Fear and feelings of incompetence make us all anxious – but typically developing people have had thousands of experiences that have led to memories of competence and success.  They have had these experiences during their early years in the special relationship they have with their parents.  It is the interpersonal engagement (interaction) that takes place within this special relationship that enables each child to develop flexibility (via those fancy-named milestones that they master). 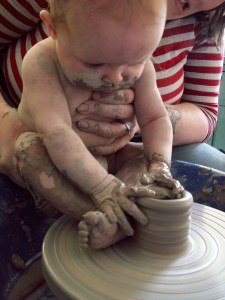 I've included this pic because I love it - it reminds me of Louis (my typically developing son) as a baby and is the kind of activity that he would have loved.  Actually he would probably love it as a 9 year old, but perhaps not naked ;-)  The other reason I love it is that it's a great illustration of a guided activity where the parent is gently introducing a new, novel experience to the baby (exposing the baby to uncertainty) in a way that promotes the baby's feelings of competence and success.  You can tell the baby is loving this new experience from the rapt expression of concentration on his/her face.

So what RDI does is it takes parents back to the beginning of development with their child so that they can help their child master those important developmental milestones that they missed.  RDI enables children with autism to overcome their rigidity and to improve their ability to regulate themselves emotionally.

Here is a link to some recent emerging research that demonstrates this:

Here is a link to a young man with autism who blogs about his own experience of RDI:

To learn more about RDI, go to www.rdiconnect.com
Posted by Zoe at 23:45 6 comments:

Inhibition, in psychology, means the conscious or unconscious constraint or curtailment of a process or behaviour, especially of impulses or desires. Inhibition serves necessary social functions, abating or preventing certain impulses from being acted on (e.g., the desire to hit someone in the heat of anger) and enabling the delay of gratification from pleasurable activities. Conscious inhibition is a common occurrence in daily life and is present whenever two conflicting desires are experienced (e.g., the desire to eat a rich dessert versus the desire to lose weight).

This study http://bit.ly/xwho9Y (Kana et al, 2007) looked at the functional connectivity between cognitive control in the prefrontal cortex and other brain regions using functional magnetic resonance imagery (fMRI).  The fMRI allowed researchers to see which brain regions were connecting to which other regions whilst typically developing people and people with autism were presented with conditions that required an inhibitory response.

The results showed a reliably lower degree of synchronization and coordination between key cortical networks in autism compared with the control group.

The research conclusion is that ‘the findings of this study suggest that in individuals with autism, inhibitory processes do not function as part of a coordinated and synchronized cortical network. Future neuro-imaging studies of autism may further modify this account, explaining the breadth and the specificity of the atypical inhibitory function in autism.’

That is a pretty difficult challenge to be saddled with.  I’m just thinking about how many times a day I use my own inhibitory response – if I’m at work, for example, I’m using the response quite a lot to manage various frustrations – both major and minor – that occur throughout the day.  I can also imagine what would happen…….to my personal reputation, to my credibility as a professional, and to my ability to work productively with others, if those inhibitory responses weren’t working properly.

You can imagine then, the sorts of trouble and misunderstandings that people with autism, many of whom have an impaired inhibitory response, could get into.

So, what can we do?  Well in RDI, we are already working with our kids to increase the dynamic neural connections in their brains, so that’s a good start.  We do this by constantly engaging with our kids in a way that allows them to function as a cognitive apprentice to the adult’s guide, in the guided participation relationship (GPR).  I have written in detail here http://bit.ly/rSxB4E about how the interpersonal engagement that is crucial to the development of flexible thinking is supported via the vehicle of the GPR.

Philip and I have been working on low level inhibition for a long time.  My main tool (as his guide) has been my use of limit-setting and non-verbal communication in a relationship that has been nurtured so that he is emotionally invested in co-regulating with me.

That emotional investment is key, I think, as it gives him part of the motivation he needs to inhibit his distracting behaviours when we are spending time together.

Below is some footage of how I regularly use limit-setting and non-verbal communication to help Philip inhibit behaviours that are a distraction to our joint engagement.

In this activity, Philip is stimming on a particularly irritating song from the Spongebob cartoon.  I won’t give you a link to it as you’ll never forgive me – its clearly been specially designed to be irritating and is one of those songs that goes round and round your head all day that you can't get rid of.  He and Louis found a clip on youtube where the song is sung in German, which they found hilarious (they have been having fun listening to allsorts in all kinds of different languages).  Here he is singing his pidgin-Deutsch version.

This is quite a long clip, as Philip’s desire to stim with the song keeps recurring and I have to switch between different tools to manage it.

Usually stims don’t bother me and I just let him get on with them (many of them are a function of our kids’ bodies seeking the sensory input they are unable to obtain otherwise) – but with one as irritating as this that is clearly getting in the way of our joint engagement, I wouldn’t have been doing my job as a guide properly if I didn’t try to manage it.

At 0.34 – 1.25 we have the full rendition ('German' version) of the song.  I let that one play out, as I don’t know at this stage what the frequency of repetition is likely to be.

At 2.00 I give Philip a warning that I am going to ‘count’ him if the singing persists (counting is a limit-setting strategy taken from the book 1-2-3 Magic)

At 2.26 he leaves the room which is a reasonable enough strategy as he is being mindful of my dislike of the song

At 2.49 I do count him, as he has had plenty of warnings now

3.22 Another song is introduced.  Here he is being jokey and playful with the song singing, and I do share the joke to some extent, although my priority is to stop the singing altogether if possible.

I then do actually have to carry this through and ‘stop the action’, which enables him to re-engage.

I then introduce a conversation which distracts Philip from song singing.  The conversation goes on for about 2 mins.

So you can see, I have used different tactics several times in order to help Philip inhibit the song singing, which was getting in the way of our joint engagement.

Then out of the blue, he plays a joke on me.  This made me laugh out loud when I played the footage back so just for fun. I’m sharing it here.

He is a crafty little blighter!  I can’t help but admire his creativity and his sense of fun, even though he is pushing the boundaries J

Our current RDI objective is all about helping Philip to develop inhibition in more challenging circumstances.  We are using role play to go back over a recent situation where there was a challenge and a breakdown in communication as well as a breakdown in emotional regulation.  In the role play, we put the ‘thinking time’ in and generate options for different solutions before choosing a solution that doesn’t involve the forbidden or unhelpful action, and which avoids the consequence of the unhelpful action.

I’m not sure we can bring ourselves to have footage of this on the blog.  We are both feeling pretty self-conscious about it at the moment (no Oscars for us!!) but I guess we may change our minds once we are more used to it.

Would love to hear from other people who have used different strategies to help support inhibition and emotional regulation.