May the Force be with you


Those of you who are part of or have been following the #JusticeforLB community and #107days campaign will know about the preventable death of Connor Sparrowhawk (LB) in an NHS assessment and treatment unit (ATU).  For those of you not familiar with the case, Connor was a young man with complex needs who needed respite during a period of crisis.  An independent report into Connor’s death found:


1.That Connor’s death was preventable
2. That there were significant failings in his care and treatment
3. That the failure of staff to respond to and appropriately risk assess Connor’s epilepsy led to a series of poor decisions around his care
4. That the level of observations in place at bath time was unsafe and failed to safeguard Connor
5. That if a safe observation process had been put in place and Connor had been appropriately supervised in the bath, he would not have died on 4 July 2013
6. That the STATT unit lacked effective clinical leadership
7. That there had been no comprehensive care plan in place for the management of Connor’s epilepsy and his epilepsy was not considered as part of Connor’s risk assessment, in breach of NICE epilepsy guidance.

Some of you will also be familiar with the case of Steven Neary, another young person with complex needs, who was deprived of his liberty and held in an ‘Positive Behaviour Unit’ against his father Mark’s and his own wishes for almost a year (Steven and Mark are now thankfully reunited).

Other young people like Josh Wills from Cornwall are not so lucky.  Josh has been placed in a Unit in Birmingham for the last 2 years (it was expected he would be there just 6 months).  Nicole Longhorn from York is in a hospital in Norwich, 4 hours travel away from her family.  Sign Josh and Nicole’s petitions to bring them home here and here.

The Challenging Behaviour Foundation note that 185 children and young people are also in similar situations, stuck in assessment and treatment units hundreds of miles away from their loved ones.


Chris Hatton recently wrote an excellent blogpost where he suggested that control of all the money currently spent on keeping people in these units and similar provisions – often out of county, excessively expensive and a significantly long way away from home - should be given to a Ninja Task Force that puts people with learning difficulties and families in charge.

I responded very positively to this suggestion and having reflected on it for a few days, I am finding that I want to elaborate on it.  The ‘should be given’ is problematic for me. It conjures up a vision of well-meaning parents and other supporters (Davids) negotiating with Commissioners, service providers and government (Goliaths) for years to gain agreement for a transfer of power and resources.

Jenni Morris wrote that the organisations that currently govern provision and access to it are steeped in what she calls an ‘Apollo culture of order and rules that undermines self-determination’.  She cites Mark Neary’s current experiences (one of far too many) with so-called personalisation as an example of this.  Jenni states that ‘if we really want to bring about positive change, we have to do something fundamentally disruptive to existing systems.’

I am marrying up Chris’ Ninjas with Jenni’s ‘something fundamentally disruptive’ (for some reason that makes me think of the ‘Something wicked this way comes’ tune from Harry Potter).

I think there already IS a Ninja Task Force and I think the Force (may it be with you) could start to make changes by rolling out a model of service provision in one local authority area.

My elaboration on Chris’ proposal – taking on board what Jenni says about the ‘Apollo culture’ of those who govern access to resources - is not to wait for the Commissioners and service providers to give us the power, but to take it for ourselves.

The Force is made up of many knowledgeable and experienced people who are involved in the #JusticeforLB campaign – there are academics, parents, LD Nurses, people who use services and know what they want, people like myself who have already done their own thing in creating alternative provision, Psychologists, volunteers, sociologists, Counsellors, Psychotherapists and more……….

I reckon we are well connected, determined and resourceful enough to pick one local authority where there is currently a publicised campaign around a young person who has been moved to provision away from home.  We could choose the local authority where we have the most collective knowledge/access/contacts/experience/clout/all of the above and put together (and cost out) a proposal for provision to locate that young person within borough and close to the family.

The new provision could be funded by crowd funding/finding an anonymous donor/applying for funding ourselves/embarrassing the major charities (who – with notable exceptions - are currently mostly absent from this debate and certainly from action around it) into providing the funding/anything else people can think of.  The maximum needed would be anything less than what the out of county provision is costing (£182K per year if it is anything like the ATU where Connor was placed).  Once that is in place – and especially if it can be shown that the cost is significantly lower than out of county provision (for example, by families pooling resources to develop joint provision) - it would be indefensible for any Commissioner to refuse to commission it.  And if they tried, the Force is also well connected enough to judicially review the hell out of it.

Once it has been done in just one area, it is then a model that the Force could use to help parents to secure appropriate provision in other areas.

Lots has been written already about what we know about the sort of provision that is needed and how it can be developed in a collaborative way that puts the needs of the young person and family right at the heart of everything.  We already know what works……but we don’t have a system for securing it because we’re dependant on others to provide it.

I think it has to be a mix of a) ‘If you build it, they will come’ (showing that it can be done by doing it ourselves), b) challenging Commissioners by presenting a simple, logical argument that pulls the rug out from under theirs and c) using public opinion and (if necessary) the law to hold Commissioners to account to provide quality services locally.


Here is a back-of-a-fag-packet argument that could be put to Commissioners: 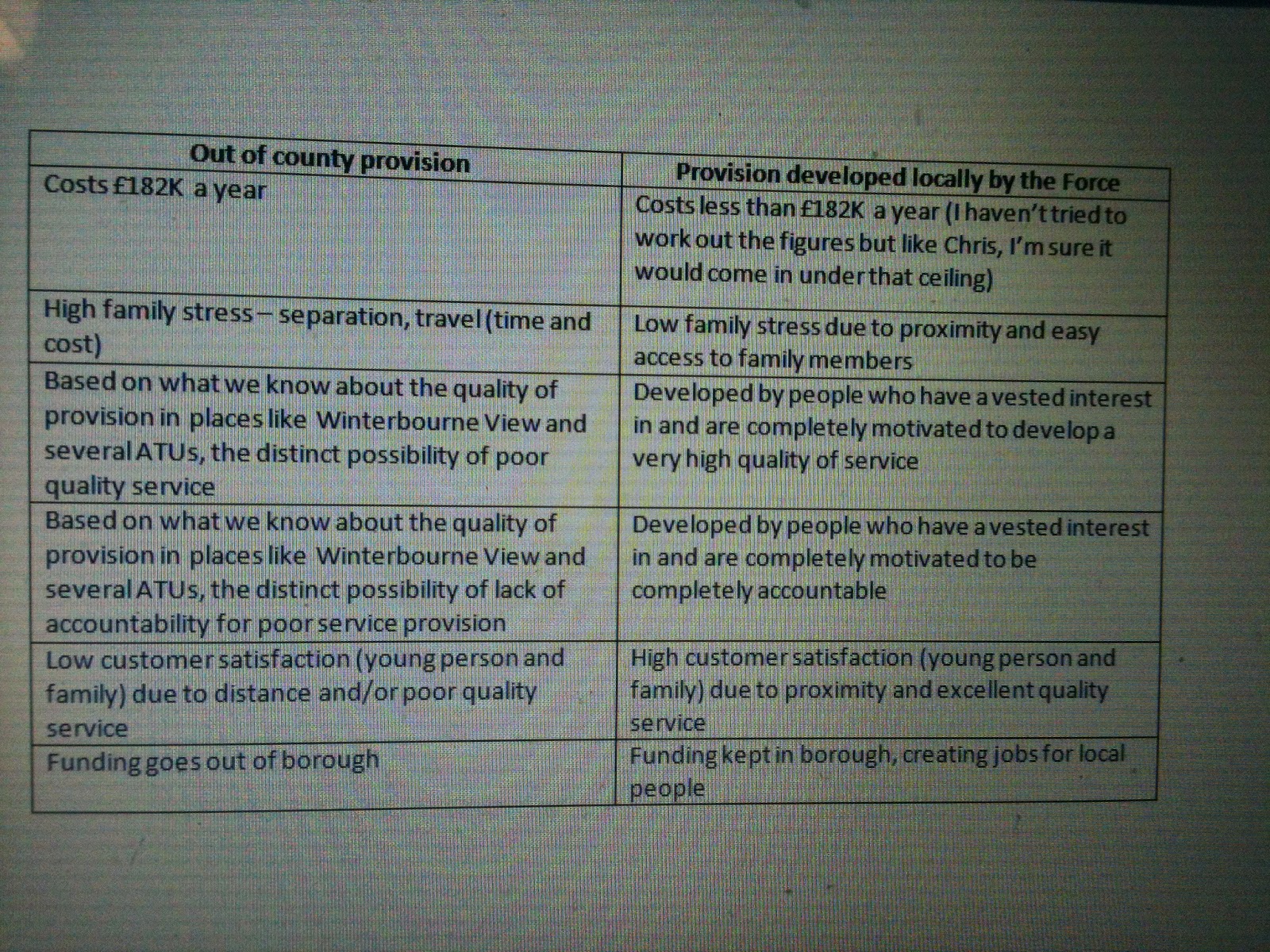 We (me and hubby) set up our own school for children with autism when it was clear that no provider was going to be able to give our child the quality of service that we wanted for him.  We didn’t want our son to go to a residential school miles away (which was the local authority’s answer when no local educational placement could be found).  We didn’t want our son to have to put up with sub-standard ‘one size fits all’ provision which would, because of its lack of true personalisation, actually have made things worse for him.

The BODY method – Bugger Off and Do it Yourself.

It’s the best, most rewarding thing we ever did.  Its bloody hard work, especially when you have to constantly navigate the Triad of Impairments (Health, Education and Social Care) but my son (and 6 other young people currently educated at Bright Futures School) now have the best chance we can give them at attaining independence, making and maintaining friendships and relationships and finding and keeping meaningful employment.

We were just two scabby parents - imagine what the Force, with all its collective knowledge, experience, commitment, passion, connections and nous, could do.