The sad death of Connor Sparrowhawk - some reflections

Connor was an 18 year old young man with autism, learning difficulties and epilepsy.  During a crisis, Connor had to go into Slade House, an NHS Assessment and Treatment Centre run by Southern Health NHS Trust where there were five patients and a minimum of four members of staff on duty 24 hours a day.  On 4 July 2013, Connor had an epileptic seizure and died in the bath.  He was unsupervised at the time.  Southern Health initially classified Connor’s death as resulting from ‘natural causes’ until an independent investigation found that his death was preventable.  Anyone who knows anything about epilepsy knows you don’t leave someone with epilepsy unsupervised in the bath. The Assessment and Treatment Centre had ‘expertise’ in epilepsy……yet Connor was left unsupervised in the bath.

Connor’s Mum Sara writes a blog about Connor, or Laughing Boy (LB), as she affectionately calls him.  This is a link to a 90 second slide show of his life .  You can read more about LB’s life, and now, unfortunately, his death and the dehumanising  treatment of his family in the aftermath of Connor’s death by Southern Health Trust.

1. That Connor’s death was preventable
2. That there were significant failings in his care and treatment
3. That the failure of staff to respond to and appropriately risk assess Connor’s epilepsy led to a series of poor decisions around his care
4. That the level of observations in place at bath time was unsafe and failed to safeguard Connor
5. That if a safe observation process had been put in place and Connor had been appropriately supervised in the bath, he would not have died on 4 July 2013
6. That the STATT unit lacked effective clinical leadership
7. That there had been no comprehensive care plan in place for the management of Connor’s epilepsy and his epilepsy was not considered as part of Connor’s risk assessment, in breach of NICE epilepsy guidance

The independent report follows a highly critical CQC inspection published in December 2013 in which Slade House failed on all 10 essential standards of quality and safety. Since that inspection report, the unit has been closed to new admissions.

£182K a year…..and even then the blasted Trust couldn’t look after Connor properly.

This stood out to me from an insightful blog by Chris Hatton: ‘The excerpts from the report ooze perhaps the central feature necessary to bystander apathy, diffusion of responsibility. Both within the unit but also crucially beyond it (how did LB end up in the position where the unit was the only option? What was the plan for what he was going to do after he left? Why were his family marginalised? Where were the Wizard of Ozian commissioners in all this?)……..no-one stood up and took responsibility for ensuring that LB could work towards the life he and his family wanted. The very quantity and range of professionals and organisations involved, far from showing the marvellousness of LB’s support, may have been a factor in his cruel lack of effective support when it really mattered.’

What will it take before families of children and young people with developmental difficulties get the quality of service they deserve?  I don’t know the answer to that but I do know I’m ready to stand up and be counted with Connor’s Mum and other supporters who want to a) see Southern Health brought to justice and b) bring about change to service provision for people with autism (and with or without learning difficulties).

I was struck, when reading through Sara's blog, by the part she wrote about LB wanting a girlfriend (tears are welling up now) and this being a possible contributory factor to his decline. The poor lad just wanted what we all want....and why wouldn't he? We all need to be connected to others, to feel valued and loved...and not just by our family who are going to love us unconditionally whatever.

When he needed connection the most….when he was vulnerable, anxious, confused about his future, needed help from people outside the family who could take the time to understand what was going on for him, the only place LB could go was a Unit with what the independent report describes as an ‘impoverished’ social environment and a culture of supporting (?) people with medication and restraint.

I woke up this morning wondering what ‘good provision’ would look like for young people with developmental difficulties in this situation.  It’s a bit of a jumble, but I think it would include elements of these 4 things:

This service offers parents and carers a true alternative when it comes to choosing services for their adult children. Established by parents, every aspect of the service is approached from the viewpoint of what is best for the individual, rather than what is necessarily best for the company.
Where others may compromise we don’t. If a room needs modifying, it will be done; if an individual’s needs require specialist staff training, it will be implemented; if an individual’s support needs change, they will be reassessed and a new support program devised.

If something unplanned happens, there is  a proactive approach. Staff learn from experience and take any necessary actions; everything is open and transparent whilst respecting the privacy of the individual and their rights.

These commitments make a difference to the lives of the people being supported, to their families, to the staff and to other organisations.

The unique, no-compromise approach values each individual and every aspect to their life, essential to that sense of feeling at home.

The very fact that parents set up this service gives me huge confidence in its potential to meet need and to care rather than caretake.

A way of intentionally creating a culture based on authentic, unconditional and reciprocal relationships.  No matter what.

Here is a video explaining more about the approach.

Integrative psychiatry uses both conventional and complementary medicine remedies in the treatment of psychiatric conditions.  This means being attentive to the many dimensions that affect both distress and psychological wellness, including a person's physical, emotional, interpersonal, behavioral, nutritional, environmental and spiritual dimensions.  Metabolic testing (e.g. hormones, adrenals, neurotransmitters, thyroid, allergy) may be used to look at chemical imbalances in the body that may be contributing to emotional and/or physical dysregulation so that these can be corrected in order to optimise wellness.

RDI recognises that because of their different neurological wiring, people with autism and other developmental difficulties have problems coping with uncertainty and change.  This often causes high anxiety, resulting in flight, fight or freeze (withdrawal, aggression or collapse).  The unpredictability (ongoing change) that is a key feature of social interaction can also be very difficult.  RDI uses dyadic (pair) relationships to gradually expose people to increasing amounts of change and unpredictability in a way that actually supports them to develop their own competence in managing uncertainty: by using their partner as a point of reference to decide what to do when presented with uncertainty and by forming special memories of their own competence in managing uncertainty that they can use when presented with a similar uncertainty in the future.  This is actually how typically developing people learn, as babies, toddlers and youngsters, to cope with and (importantly) enjoy uncertainty and change….so RDI mirrors a natural process.

Some of the earlier posts on this blog show me working with my son to do exactly this.  This blog  shows another Mum working with her son who has learning difficulties as well as autism.  RDI can be used with people on any part of the autism spectrum, at any age.

So my melding of the above 4 components is not about locking people away and medicating them….or at least if they are medicated, due to crisis, it’s for a short time and within the context of a plan that seeks to get to the bottom of their crisis experience and get them off medication asap.    It’s about establishing a relationship of trust….where our young people feel safe, accepted and loved.  It’s about accepting that they have challenges, that they need specialised, sensitive and multi-faceted support to help them to work through those challenges so that they can achieve the best quality of life possible.

If someone is struggling with the transition to adulthood…..developing an awareness that peers and siblings are starting to have romantic relationships and realising that this is going to be hard for them because of their differences……their need for connection is not going to disappear with medication or incarceration.

Look at the common threads running throughout each of the 4 examples above…..relationships, connection, the investment of time and understanding, trust.

Imagine if that had been available to Connor and his family.

The #JusticeforLB campaign has been put together to try and draw attention to his preventable death, ensure that people know about him and that change occurs.  If you are on Twitter and wish to comment, please use #JusticeforLB.

LB’s family is raising funds to cover the costs of legal representation at the inquest into his death.  Here is a link with further information on how you can help. 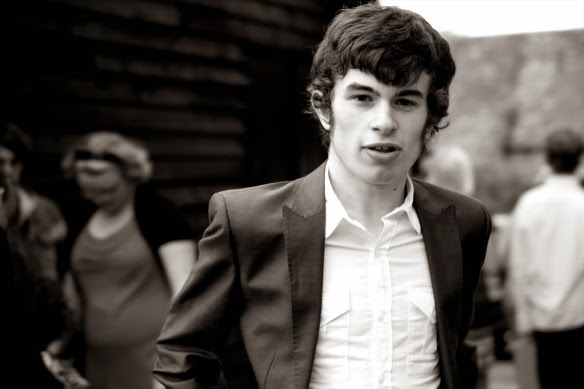