At Bright Futures School, some of our staff have been looking with me at what makes a good guide and what needs to be in place for the guiding relationship to be successful.  One of our staff, Karen, has kindly given permission for me to share her response to an assignment I set, which I'm really pleased about, because she gives a great illustration of the guiding relationship.  Karen is describing what happened when she had a go at mindfully guiding her typically developing son (always good to practise on typically developing children first!!).  Here is the dialogue between us:

Please write me a short paragraph on a time in your life when you took part in a ‘guided participation relationship’ i.e., where you were either: a) guided by someone to learn something new or b) a guide to help someone else learn something new.

I have spent ages thinking of particular instances that I have guided someone and eventually realised that I do this much of the time without realising it with my young son, Daniel. I waited for a good opportunity to engage in an activity or task with him and tried to think more and consciously practice guiding with him.

Dan told me he was hungry and wanted a sandwich which he wanted to try and make himself. I said we could both make our own sandwiches as I was hungry too. We discussed what things we needed to make ham sandwiches and assembled them.

With all the ingredients on the table we began our task. I took two slices of bread from the packet and passed the packet to Dan nodding to him when he looked at me and smiling as he copied and took his bread.

He watched me (referencing) pick up my butter knife and begin buttering my bread and started to do the same looking over at intervals for reassurance which I gave him that he was doing a good job, thumbs up and smiles. He carried on - smiling and pleased with himself. When the bread was buttered I got the packet of ham. Dan said he wanted to open it and get his ham first. I said that was okay but he started to get frustrated and upset because he couldnt do it and said he didn't want to do it any more.

I suggested that we could share the ham opening as he had done so well making his sandwich so far that it would be a shame to not finish it when I knew he could do it. I said that I would start the lid peeling off and he could finish it, he was happy with that.  We put our ham onto our buttered bread and completed our sandwiches. Dan looked over to me and I told him he had done a good job and made an excellent sandwich. He gave me a beaming smile and looked really proud of himself.

My feedback on Karen’s response:

Thats absolutely correct - what we do as parents with our typically developing children is act as their guides. We do this intuitively, without even thinking about it. In autism, the framework for the guiding relationship has broken down, so we need to put it back in place, which we do with pausing, pacing, scaffolding, spotlighting, authentic roles etc.

I like the way you start off this activity with modelling when you take the bread out and pass the bag to Dan.

When Dan starts to get upset that he cant open the ham packet, you come in with a great scaffold by suggesting you share the ham opening. This part I think is a good illustration of how something small could make an activity fail, if you were working with a child with autism. In the past I have been in situations like that when something unexpected has presented itself and Philip has withdrawn totally. Subsequently I have had to think through what he might find difficult and have a plan to address it so that he didnt experience incompetence. In RDI, we call this 'framing' the activity. So I might have had the whole ham packet open, removing the need for any struggle with opening.

Here, when the ham presented a problem and the problem was what we call 'edge+1' you were able to scaffold Dan so that he was competent. The problem was not at the edge of his competence (he would have been able to resolve it alone if it had been) it was 'edge+1' (a possible tip-over point....usually where a scaffold is needed from the guide in order for the child to safely and competently resolve the problem).

When you told him he had done a good job and made an excellent sandwich, you were spotlighting his competence. He will most likely have laid down a special episodic memory here. An episodic memory is a personal, autobiographical memory. We use these memories to build our resilience.

When Dan looked at you and gave you a big smile, he was sharing emotion with you. Emotion and experience sharing is something children with autism dont do much of (again, because the guiding relationship has broken down and the framework for facilitating competence (scaffolding, spotlighting, roles etc) isnt there).

I thought what you described was an excellent example of a guiding relationship. Your detailed description allowed me to put an RDI perspective on it and show you some of the component parts of guiding that you were instinctively using.

Hopefully that will be helpful to some families who are at the beginning of learning about guiding.

No video clips this time, so here are some recent photos from school. 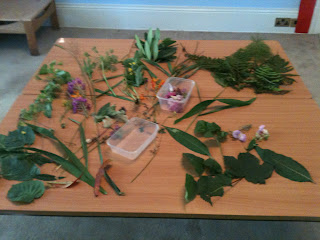 Some pupils were not keen on the bugs, so they are kept very carefully away from their desks.

Not sure what all these leaves and flowers are, but some of them are providing a good habitat for the bugs and beasties that were found. 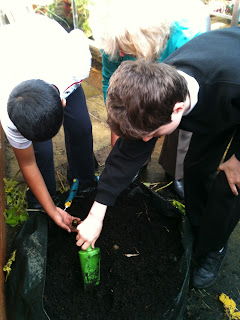 All the foliage was cut away and together two of our pupils dug around to see what they could find.

They took it in turns to use the trowel and when we had unearthed a good number of spuds, it was all hands around the bag to give it a good shake up to see if there were any lurkers hiding.  There were.

A couple of the spuds had fallen victim to slugs - we decided that they looked as if they'd been deflated.

We guessed that it would be hard to completely slug-proof the grow bag and thought about what we might do next year to improve our crop even further. 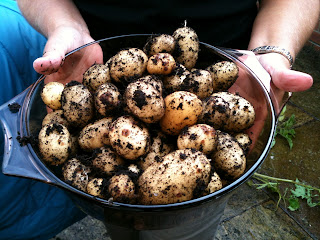 Here is the crop!  Not a bad harvest :)  We shared out the potatoes amongst the 4 pupils so that each could make what they wanted with their share.

One of the cucumbers we've grown in the green house is providing the snails we found with a luxury meal.....so we're being quite productive with our haul!